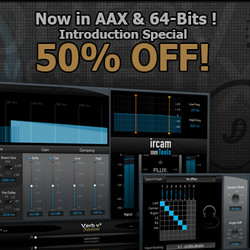 Flux has announced the release of the AAX Native and 64-bit compatible versions of IRCAM HEar – Binaural encoder and IRCAM Verb Session – Algorithmic session reverberation processor, built on its new Version 3 (v3) framework. Additionally, its other plug-ins have been updated to v3.1.1 Build 31018.

The v3 framework improves the performance dramatically and for the graphic rendering it includes a GPU-efficient 2D/3D graphic engine, first introduced in the Pure Analyzer System, based on the OpenGL standard optimizing the audio-to-visual experience utilizing the GPU on the computer’s built in graphics card.

With the Flux:: v3 framework support for OSC (Open Sound Control) is introduced in order to allow for remote control of the plug-in parameters using OSC enabled devices and software applications such as TouchOSC for iPhone / iPod Touch / iPad.

IRCAM HEar v3 and IRCAM Verb Session v3 are available on 32- and 64-bit Mac OS X and Windows in AU, VST and AAX Native plug-in formats. The plugins are available to purchase at an introductory 50% discount for a limited time. The updates are free of charge to users of previous versions of the software (or a bundle containing it).

Note: On Windows, due to deep change in the installer, it is recommended to uninstall previous versions before installing this new one.

Action Delay effect plugin by NoiseAsh on sale for $24.99 USD

AAS Chromaphone 3 strikes in full dynamics with acoustic sharpness and...