Focusrite has announced the RedNet AM2 stereo audio monitoring unit, a new product in its popular RedNet range of Dante audio-over-IP products. 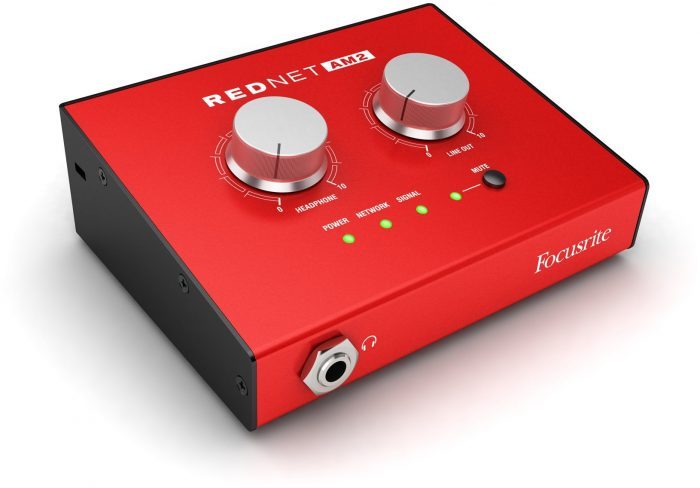 RedNet AM2 is a Dante-compatible stereo monitoring unit combining headphone and line outputs for flexible monitoring of signals sourced from the Dante network. RedNet AM2 features a quarter-inch front-panel headphone socket plus a pair of balanced line outputs with male XLR connectors mounted on the rear panel, which may be used for loudspeaker monitoring and other applications.

The headphone output delivers significant audio output power, sufficient to drive even high-impedance headphones at substantial levels. RedNet AM2, fitted with non-slip feet, is designed to either sit securely on a flat surface or be mounted on top of a mic stand using a standard threaded bush in the base.

RedNet AM2 includes a two-channel Dante receiver based around the latest “Ultimo” hardware and features a road-worthy aluminum extrusion-based enclosure. Two large volume control knobs are provided for Headphone and Line output levels; the latter also features a mute button with associated LED. Other indicators show the presence of power, network and signal.

The unit may be powered either via PoE (Power over Ethernet) or via the 12V DC input barrel connector (universal power supply included). Dual etherCON connectors are included to connect the network and to daisy-chain to additional network devices.

RedNet AM2 is planned to ship spring 2016. This product is being shown at the 139th International AES Convention in New York, October 30–November 1, 2015.