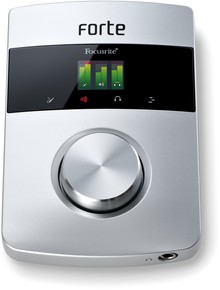 Focusrite has added two brand new interfaces to its line up, both bring completely new features to musicians and producers.

Focusrite ForteForte is quite simply the best 2 in 4 out interface available for Mac and PC. Encased in an aluminium body, Forte is a portable high-end USB audio interface with two mic preamps that share the same design as the flagship RedNet range. It features superb digital conversion, an OLED display (full colour) touch controls and DAW control – play, stop and zoom functions as standard.

The iTrack Solo is an audio interface for your iPad.

It has a single Focusrite mic-pre – as featured in the Scarlett and Saffire ranges – an instrument input, speaker and headphone outputs, a direct monitor selector (for latency free monitoring) and switchable phantom power. It also functions as a full USB audio interface on mac and PC.

iTrack Solo is the perfect companion for any singer-songwriter wanting to take their demos to the next level.

The Forte and iTrack Solo will be available October 2012, with a list price of $749 USD and $200 USD respectively.