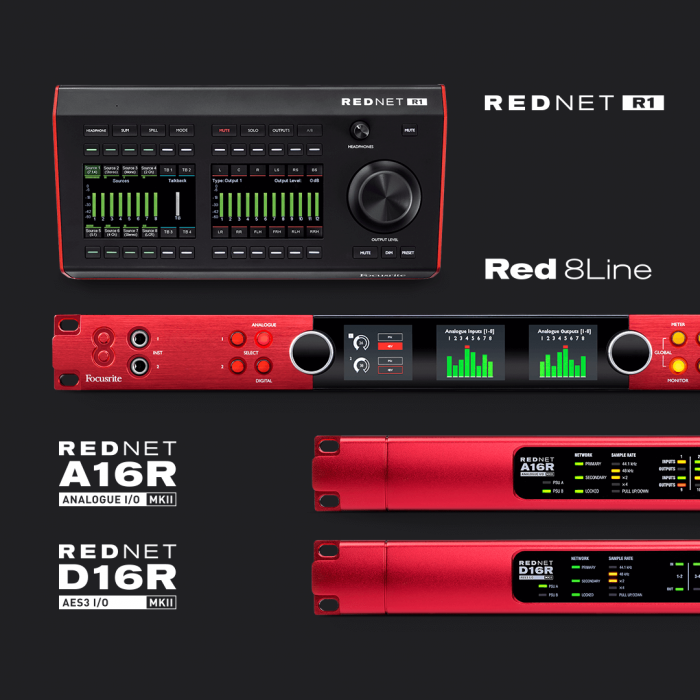 First up is Red 8Line, a new addition to the hugely powerful Red range of Pro Tools | HD, Thunderbolt and Dante audio interfaces. Red 8Line is the best choice for professionals who work in Pro Tools | HD and other DAWs — on both Mac and PC, thanks to the new Windows 10 drivers for Thunderbolt 3-equipped PC users.

With mini-DigiLink, Thunderbolt 3 and Dante connections, it’s possible to instantly switch between Pro Tools, other DAW applications, and a vast world of Audio-over-IP, without the need to reconfigure audio settings. Pair it with the new RedNet R1 desktop remote controller, for an incredibly powerful user experience.

RedNet R1 is a desktop remote controller that supercharges any Red range interface, by enabling audio professionals to interact with their audio like never before. It can control a range of different monitor output setups, ranging from mono through to 7.1.4 surround, including Dolby Atmos and other immersive audio workflows. Alternatively, completely custom setups of up to 12 outputs can be configured for bespoke speaker configurations.

RedNet R1 can be used to control groups of outputs from a Red interface’s multitude of sources and destinations, including Pro Tools | HD and other DAWs, analogue inputs and outputs, ADAT and S/PDIF connections, and from entire Dante Audio-over-IP ecosystems, simultaneously and interchangeably. Top-panel control includes level, reference level preset selection, cut, dim, mute and a variety of solo modes. There’s also an A/B functionality for switching between numerous monitoring presets, and up to four fold-down presets allow for quickly checking downmixes.

RedNet R1 also features Dante-enabled talkback, an internal mic and an XLR input for connecting an external mic, and a high-powered headphones output, so users can interact with their Dante system like never before. Up to four talkback destination groups are available when used with a Red interface (when used with other Dante devices, a single talkback group is available). RedNet R1 features two LCD displays for highly accurate level metering of the outputs, sources and headphone outputs, and for giving visual cues for easily navigating menus.

The unit is configured using RedNet Control, the software manager designed primarily for ease of use in quickly setting up both simple and complex monitoring and routing configurations. Other features of the RedNet R1 include a quarter-inch jack socket, which accepts a footswitch for talkback management, LFE muting and more. It can be powered via Ethernet to reduce cabling complexity (using the PoE standard), or by supplied DC power supply.

RedNet R1 will also be available in November, 2020.

The new MkII models — RedNet A16R MkII and RedNet D16R MkII — share the same feature set as their predecessors, but are upgraded with individual level controls for input and output channels. This allows precise calibration of all inputs and outputs, making the process of accurate alignment of connected equipment more straightforward.

RedNet A16R MkII is a 16×16 line-level analogue interface, which is perfect for getting 16 channels of analogue audio on or off a Dante Audio-over-IP network.
RedNet D16R MkII is a 16×16 AES3 interface — ideal for interfacing between digital audio equipment such as consoles and power amplifiers, and a Dante network. Both units feature dual PSUs and primary and secondary networks, for redundant operations, with audio switchover in case of power loss or network failure, making them ideal for critical path applications, such as broadcast, live sound and post production.

The interfaces are available now. 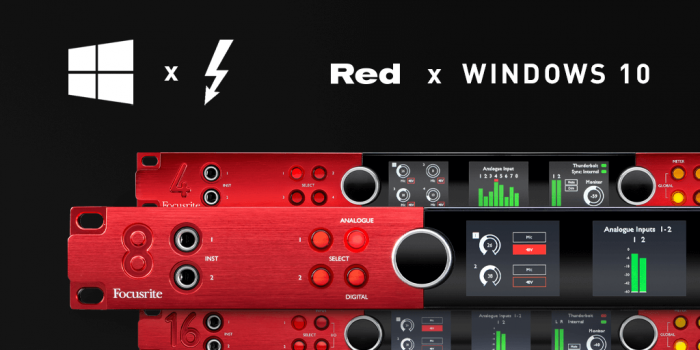 For the first time, PC users running Windows 10 with the appropriate Thunderbolt 3 hardware are able to use Red interfaces — Red 4Pre, Red 8Pre, Red 8Line and Red 16Line — in their audio systems.

Red interfaces are Thunderbolt devices that feature direct connectivity to both Pro Tools | HD and Dante audio environments as standard, without the need for option cards or hardware upgrades. With Red range interfaces, modern audio professionals can work seamlessly cross platform: just switch in real-time via RedNet Control or via the interface’s front-panel screens.

The drivers will be available this November.