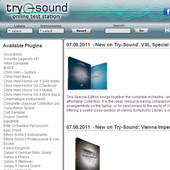 Try-Sound has announced the availability of four new virtual instruments at its online testing platform.

Try-Sound is presenting the possibility to test virtual instruments over the internet from the comfort of your living room or studio, no matter if using Windows or Apple Mac OS. The use of Try-Sound is FREE!

There are more than 50 virtual instruments now in the Try-Sound portfolio. The following two brand-new „Best Service ENGINE“ libraries, and, for the first time, two titles from „Vienna Symphonic Library“ have been just added.