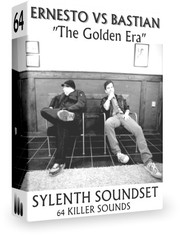 Frantic Records has released Ernesto vs Bastian – The Golden Era, a new soundset for the Sylenth1 software synthesizer.

“The Golden Era” is a new 64 preset soundset for Sylenth from Lennar Digital programmed by ErnestoVsBastian. this new batch of sounds will take your productions to the next level, everything you need to make that next floorfiller. All sounds are ready and geared for Trance.

Edwin Koelewijn,better known to the community at large as Ernesto vs. Bastian has been crafting his very own electronic dance formula. In that time the Dutch Producer/DJ has propelled himself to the forefront of trance (& dance) culture, through stellar productions, revered remixes and show-stealing DJ performances.

The Golden Era soundset is available to purchase for 23.95 EUR.