Fred Anton Corvest has announced the release of a universal AuV3 envelope follower that tracks the contour of your input signal and delivers envelopes via MIDI CC.

FAC Envolver allow you to breathe life into your sound by providing interesting natural modulation that will always be different by nature. 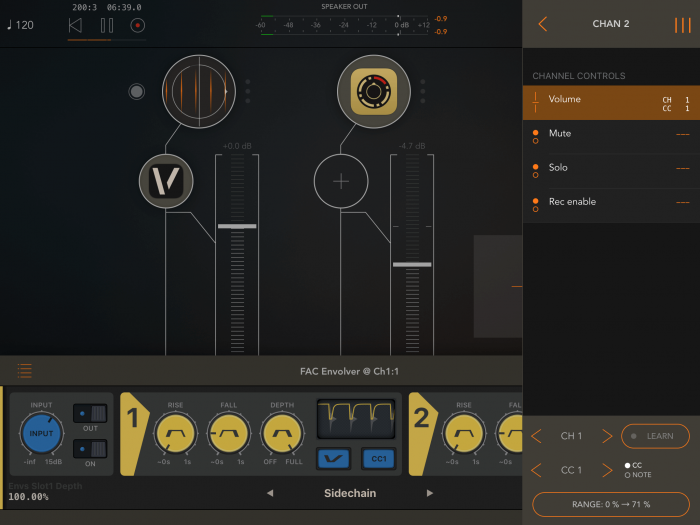 FAC Envolver is an envelope follower, this implies that it tracks the contour of the input signal and builds a corresponding envelope. Think of the envelope as the outline of the graphical representation of a rectified version of your input signal. By its very essence, it’s exactly what you get. But the process does not stop there and gives you the ability to modify the shape according to a set of provided parameters.

So it’s possible to define the rise and fall time as well as the depth of the envelope or also to invert it. Those parameters are the key to ensure the flexibility of the effect, and to meet the goal you are looking for.

The previous lines are more a general presentation of what an envelope follower does, but the particularity of FAC Envolver, which makes it an outstanding and versatile tool, is that it delivers the envelope via MIDI control change messages or commonly referred to as CC.

The key is to map the CC number parameter to the volume, cutoff, resonance control of your synthesizer or effect units. By doing so you will get instant additional hands to tweak your parameters automatically depending on what you are currently playing.

FAC Envolver is available for purchase for $6.99 USD.