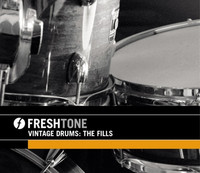 With their debut release The Lost Tapes Vol 1 proving to be Time+Space’s biggest selling sample library of 2011, there have been high expectations for Freshtone’s second release – Vintage Drums: The Fills – and it doesn’t disappoint.

Having initially aimed to produce a couple of hundred prime fills, Freshtone had such great sessions in the studio that they just kept going. This package includes 1,500 files encompassing not only the fills themselves but full drum breaks, rides, hats and percussion too.

These loops are full of soul, and Freshtone hope they represent an exemplary and definitive collection which will meet all expectations. As well as conventional time signatures users will find some unusual ones, as well as styles that are otherwise fairly uncharted on more conventional packages.

Like The Lost Tapes, this latest collection was recorded in a true vintage analogue environment with drummers Emre Ramazanoglu and William Bowerman.

In addition to the usual WAV/Aiff/Acid WAV/Rex 2 formats, Freshtone have listened to their users and have also included full multisampled, velocity sensitive kits for EXS24, Halion and Kontakt in the download version.

This is a truly comprehensive selection that will fit neatly into your production arsenal.