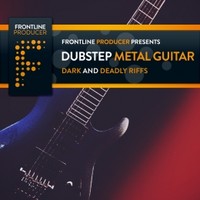 Frontline Producer has launched Dubstep Metal Guitars, a collection of dark and deadly guitar loops, pulled from the pit and ‘tune ready’ for producers worldwide.

This time we equipped the studio with a Mesa Boogie Rectifier glued on maximum, a collection of axes and a gang of guitarists, that when you added up their combined ages, it mysteriously came to six hundred and sixty six

All we had to do was cautiously press record.

However, enough of the effort, headaches and bleeding ears that went into the creation of these masterpieces from below, what you actually want to know is what to expect in this metal monstrosity.