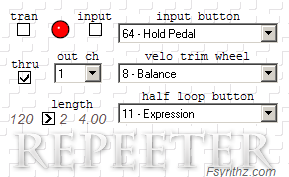 This MIDI processing unit lets you record a short midi phrase – and set it to loop immediately, for you to play to this loop. You need only one button/pedal (Sustain aka Hold by default) to control the record. The former loop still plays while you prepare to record a new one: the record starts on the first midi event you play, runs 1/2/4 bars (you set it), stops automatically – and the new recorded loop goes repeating from now on.

So you have to hit the Sustain only once (shortly) – to record a loop and set it to play.

RepeeteR is available to download as a freeware VST instrument for Windows.