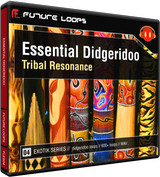 Future Loops has announced the release of Essential Didgeridoo – Tribal Resonance, a sample library that features over 600 authentic Didgeridoo and Didgeribone loops.

“Essential Didgeridoo” includes hundreds of loops performed by the legendary Charlie McMahon who is regarded as one of the most prolific Didgeridoo players in the world and is also the inventor of the Didgeribone – a mix between a trombone and a didgeridoo.

6 different Didgeridoos and 1 Didgeribone were used to record “Essential Didgeridoo”, ensuring an optimal range of texture, sonic personality and keys. The loops were divided into 5 Tempos (70, 90, 110, 130 and 150 BPM), so you can have the little nuances that result from playing the Didgeridoo in slower or faster tempos.

The wide range of Tempos will also allow you to easily suit the loops to different genres making it a perfect fit for modern and electronic music styles such as Trance, Techno, Chillout, Drum N Bass, Dubstep or Ambient among others.

Essential Didgeridoo is available to purchase as a download for $49.97 USD.