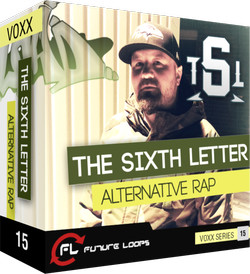 Future Loops has introduced Alternative Rap, an out of the box collection of vocal loops and acapellas by UK MC The Sixth Letter.

The Sixth Letter also known as Fletch has been playing live and releasing his work for over 10 years with inspiring performances that have reached a wide audience all over the world.

Future Loops and The Sixth Letter have teamed up to bring users a vocal sampler that browses some of the MC’s signature styles ( Punchlines, Rap, Alternative, Spoken word, Acapellas and more) and is ideal for Hip Hop, Dubstep, Drum & Bass and Breaks productions.

The Sixth Letter – Alternative Rap includes over 230 vocal samples with tempos that range from 75 BPM to 175 BPM – all 100% royalty-free.

This sample pack is available for purchase with an introductory summer discount of 25% (limited time offer).