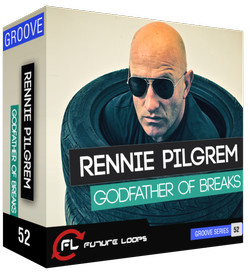 With a rich career of over 20 years, Rennie started playing on funk bands and producing acid house and techno in the early 90s. Together with Ellis Dee they formed Rhythm Section and later Rennie created Thursday Club Recordings (TCR) on which he has released over a hundred tracks and singles.

With over 670 loops & one-shots, Godfather Of Breaks is offered in WAV & REX format and is 100% Royalty-Free.