FXpansion has announced the release of Ski Rize Dubstep, a Geist Expander for gritty dubstep music. 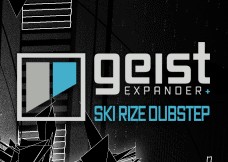 Created by ‘Subject’ from Ski Rize Studios, the included sounds are designed specifically for making hard-hitting, heavy urban beats. The result is a vibrant palette of relevant material which saves you from trying to find a handful of useful sounds in more generic sample sets.

Ski Rize Dubstep contains fierce basses, razor-sharp drums and a collection of dubby special FX, vocal one-shots and more. The sounds feature intricate programming and acutely tuned grooves which effortlessly give your music an authentic flavour. The Geist-format presets and engines include comprehensive pattern and scene setups, allowing you to jam with Geist’s accurate scene-switching for fun, satisfying composition on the fly.

Ski Rize Dubstep contains over 400 single-hit samples and 140 loops, which include drum and hihat breaks as well as a selection of rare loops from the archives of top UK reggae studio, Reality Shock. The WAV and RX2 format samples can be used in any sample playback device which accepts these formats.

Geist Expander: Ski Rize Dubstep is available to purchase as a download for £18 GBP/€21 EUR/$29 USD.