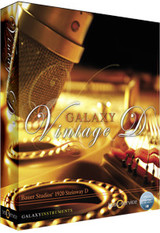 Galaxy Instruments has announced the release of Galaxy Vintage D, a virtual grand piano that is based on samples of a Vintage Steinway D, a true legend of its class, located at Bauer Studios in Germany.

The Model D-274 by Steinway is very likely not only the most popular concert grand, but also one of the most acknowledged ones. Bauer Studios’ Vintage D was built in 1920 in Hamburg, the German factory of Steinway & Sons. Over almost 90 years this instrument has achieved a very deep and intimate timbre, thus providing an energetic personaltiy and a beautiful singing tone, typical for great Steinway grand pianos. Some of the best pianists have recorded legendary albums on this 1920 Steinway D, among them Keith Jarrett, Chick Corea, Carla Bley, Guillermo and Gonzalo Rubalcaba, Abdullah Ibrahim, Wolfgang Dauner and many others. Rich Beirach called it ‘the best piano in the world’.

Galaxy Vintage D for PC and Mac (VST/AU/RTAS/Standalone) will be released January 2010 with an MSRP of 149 EUR.