Genelec has announced it is offering the 8430A SAM Studio Monitor enabling direct monitoring of audio-over-IP stream content – the first studio monitor on the market supporting AES67 and RAVENNA standards. 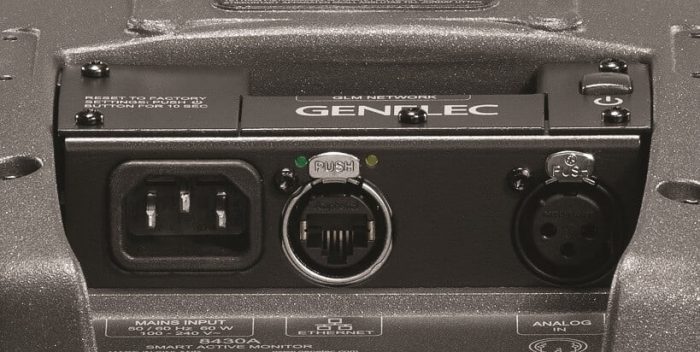 Based on RAVENNA technology for audio transport over IP networks, and fully AES67-compatible, the 8430 is the culmination of many years of intense research that included feedback from leading engineers and producers in the recording and broadcast sectors. In recent years, much has happened in the world of audio-over-IP, including the publication of the AES67 interoperability standard in 2013. AES67 is now fast gaining acceptance as an industry standard and is rapidly establishing audio-over-IP in the mainstream.

As a member in the Genelec Smart Active Monitoring (SAM) Series, the 8430 shares the electro-acoustic features such as Genelec MDE™ and DCW™ technologies, a flow-optimized reflex port, very low distortion, high SPL and wide bandwidth, uncolored response in a very compact enclosure – all this achieves the accurate sound reproduction. Also, as member of the SAM Series, the 8430 uses the highly intuitive Genelec Loudspeaker Manager (GLM™ 2.0) control network and software allowing adjustments of all aspects of monitor settings and full multiloudspeaker system control. As a central part of GLM, Genelec AutoCal™ automatically ensures that every monitor on the network is aligned for level and timing, as well as being compensated for room response anomalies.