Plugin Boutique has announced a sale on Audiaire, offering a 20% discount on plugins and expansions for a limited time only. 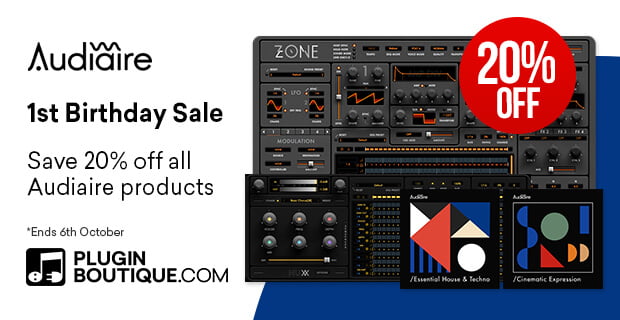 Audiaire celebrates their first birthday with a special 20% promotion. Save on their creative Zone Synth and expansions along with their ultra-flexible and inspiring Nuxx FX Step Sequencer and expansion.

The sale includes the Zone Synth, a powerful parameter sequencer that allows virtually every control to be assigned to and modified by its own independent sequencer lane, with unlimited lanes, each running at their own unique rate and number of steps.

As a feature-rich synth with a host of filters, 151 wavetable oscillators with user import, 22 insert FX, powerful mod matrix and much more.

With a 32 step note sequencer – allowing pitch, velocity, gate, probability and +/- swing at a variety of rates. Or with infinite note and parameter sequencer lanes, with complex tools and presets for modifying lane behaviour. The sound generation possibilities are virtually limitless.

Nuxx is a powerful multi-FX processor with dedicated parameter sequencer and 30 effects types.

Nuxx can be used in two distinct modes. In its simplest form the sequencer can be hidden allowing use as a simple 6-knob multi-FX unit, or as a powerful glitch machine with real time automation on every FX parameter.

Expansion packs for both Zone and Nuxx are on sale at a 20% discount during the promotion as well.