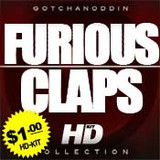 Angry, mad, Hard Hurtin Furious Clap Samples designed to bring the angry oomph to the music production process. Use these clap samples to take beats to the next level. Furious Clap Samples bring 16 high definition mastered sounds in 32, 24, 16bit and 44.1kHz format for only a $1.

Value at a great price, these clap samples can be used for seasoning and unique sound design on Hip Hop, RnB, Reggaeton, Latin, Dance or any style track.

Furious Claps HD is available to purchase as a download for $1 USD.