Guitar Center has announced it has partnered with Moog Music Inc., to become the official sponsor of the electronic musical instrument store within the Moog Pop-Up Factory during Moogfest 2016. 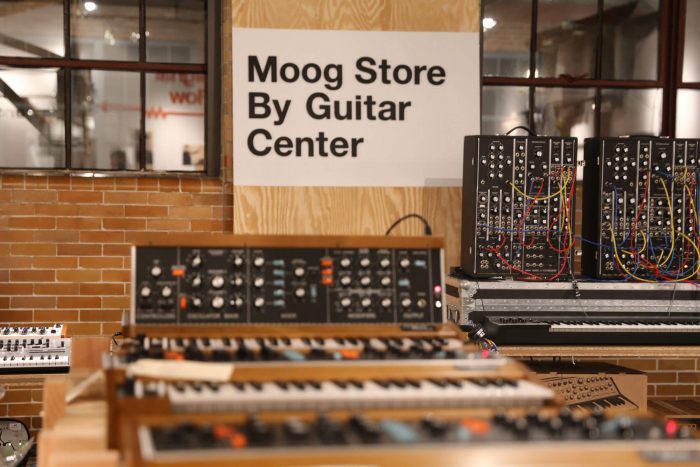 Now in its 12th year, Moogfest celebrates the legacy of Bob Moog, the visionary engineer who pioneered the analog synthesizer and other technology tools used by artists like Stevie Wonder, David Bowie and Kraftwerk. The four-day festival runs from May 19-22 in Durham, North Carolina, and will feature over 250 innovators in music, art and technology – from Gary Numan, GZA, Grimes and Laurie Anderson to virtual reality pioneer Jaron Lanier and transhumanist visionary Dr. Martine Rothblatt.

At Moogfest 2016, the legendary Minimoog Model D will be put back into production for the first time in 35 years, and Guitar Center will make these instruments available to customers at the “Moog Store by Guitar Center” in the Moog Pop-Up Factory where the instruments are being built onsite. As one of the most iconic synthesizers of all time, the original Minimoog Model D was in production from 1970-1981 and is regarded as the prototype from which all modern synthesizer designs are based on. In addition, Funk legend Bernie Worrell, founding keyboardist of Parliament/Funkadelic, and architect of some of the most influential Minimoog bass lines, will be appearing at the Guitar Center Moog Store on Thursday, May 19, and Friday, May 20.

“The Minimoog Model D is the instrument that set the stage for modern-day synthesizers, and we are honored to be the exclusive retail channel for this launch of the rebirth of this iconic keyboard. Having been chosen to have our Moog Store at Moogfest 2016 represents a truly unique opportunity for keyboard enthusiasts to get their hands on one of the first units produced, and it further underscores GC’s position as the comprehensive resource for all musicians. It should be a great event, and we are proud to be associated with Moogfest 2016.” – Michael Amkreutz, Guitar Center Executive Vice President, Merchandising, Marketing and E-Commerce

“Guitar Center understood our vision and worked in lockstep with us to design a wonderland of interactive experiences for those who appreciate electronic music and the art of synthesis. This is a unique partnership that enables Guitar Center customers at Moogfest to witness their Minimoog Model D Synthesizer being handcrafted, while some of the greatest and most influential artists to ever play this storied synthesizer, like Bernie Worrell and Gary Numan, look on. We are grateful that Guitar Center’s phenomenal collaboration helped us to realize this fantasy.” – Emmy Parker, Moog Music Brand Director