Hal Leonard Books has announced Making the Scene: Nashville, a step-by-step guide by Liam Sullivan, showing you how to live, network, and succeed in Nashville. 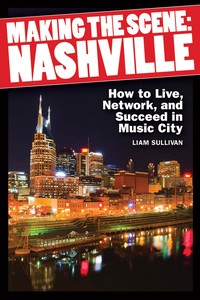 How hot is Nashville? So hot that when ABC was looking for a setting for a musical/drama series to compete with Fox’s Glee and NBC’s Smash, it landed in Music City, U.S.A. Aspiring singer-songwriters, country music fans, and musicians of all stripes inspired by ABC’s Nashville to move to country music’s hometown will find a wealth of invaluable information about what it will take to make their mark in Making the Scene: Nashville – How to Live, Network, and Succeed in Music City by Liam Sullivan.

One could argue that moving to Nashville is the easy part. Getting acclimated and gaining a foothold in the Nashville music scene can be another story. Making the Scene: Nashville addresses those challenges, while serving as a comprehensive guide for musicians and artists looking to move to and establish themselves in the city. Making the Scene: Nashville is filled with interviews with Music Industry professionals, who provide insight into how the music scene in Nashville works and what the best plan of attack is for hitting the big time.

There are also uplifting and heartwarming interviews with singer-songwriters from around the country who have made the move and embrace Nashville as their new musical home. Music venues in Nashville are plentiful and bustling with singers and songwriters every night, and Sullivan lays out a step-by-step approach to figuring out not only how to get gigs, but also understanding how the music business in Nashville works. With the help of interviews with a host of Music Row professionals, Making the Scene: Nashville covers every facet of Nashville’s music scene: from tips to performing “live” to understanding music publishing terms that every musician should know. Sullivan explains the best way to approach an open mic or writer’s night, and maps out the most musician-friendly neighborhoods. He also looks at Nashville’s hundred years of music history, important to know when speaking with music publishers and executives alike.

Van Morrison once said, “Music is spiritual, but the music business is not.” From where to buy gear to where to see live music and where to network and exchange ideas with other musicians, Making the Scene: Nashville provides the tools newcomers will need to meet the challenges of the business and make the move to Nashville.