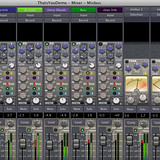 Harrison Consoles has released version 1.3 of Mixbus, a virtual mixing console for Mac.

Mixbus™ is a virtual “analog console” integrated into a full-featured Digital Audio Workstation (DAW). Mixbus “True Analog Mixing”™ provides critical mixing functions in a knob-per-function interface. “True Analog Mixing”™ is based on Harrison’s renowned 32-Series and MR-Series console designs, plus Harrison’s proprietary digital mixing technology. Mixbus™ enables you to record, edit, and mix a musical performance in-the-box while getting a sound that harkens back to the golden age of album recordings.

Mixbus is available to purchase for Mac, priced at the introductory price of $79.99 USD.