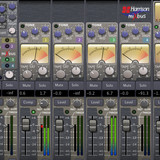 Harrison Consoles has announced the release of Mixbus, a virtual “analog console” integrated into a full-featured Digital Audio Workstation (DAW).

Mixbus “True Analog Mixing”™ provides critical mixing functions in a knob-per-function interface. “True Analog Mixing”™ is based on Harrison’s renowned 32-Series and MR-Series console designs, plus Harrison’s proprietary digital mixing technology. Mixbus™ enables you to record, edit, and mix a musical performance in-the-box while getting a sound that harkens back to the golden age of album recordings.

Traditional DAW mixers were designed by companies with no pedigree in music mixing, and they suffer from well-known flaws. Harrison eliminated these flaws in Mixbus by completely replacing the DAW’s internal mixing engine and applying proprietary True Analog processing. Harrison consoles are known for their great-sounding EQ, filters, dynamics, and bus summing on every track. Now Mixbus offers every engineer a real Harrison music console “in the box”. With Mixbus’s logical knob-per-function interface, the user works with the fluidity of a traditional analog recording studio while retaining the convenience of a DAW. Mixbus enables the user to record, edit, and mix a musical performance “in the box” but get a sound that harkens back to the golden age of album recordings.

Mixbus is available for Mac OSX for the introductory price of $79.99 USD.