Harry Hill has announced a competition in which you can win a record deal. 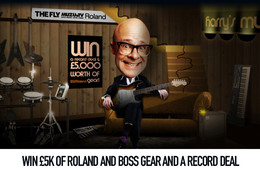 How would you like a career in the limelight? Making music, selling singles and getting loads of freebies to boot? All this and more is up for grabs as Roland searches for the UK’s best undiscovered talent.

Roland has teamed up with Harry Hill to find the UK’s next big thing – and the winner will get star treatment, a shed-load of top-notch Roland and Boss equipment and a record deal with Harry’s Magic Octopus records. Harry Hill is even putting £20 of his own money into the prize fund.

The search is taking place on Harry’s website and singers, rappers and bands in any genre are welcome to get involved. ‘I want to see what Britain has got in the way of bands and new artists,’ says Harry. ‘I’ll be choosing Harry’s Protégé and will guide them as they take a once-in-a-lifetime chance to be put firmly in the spotlight’.

The winner will receive £5,000 worth of Roland and Boss gear and will have a single recorded and released on all the major music download sites. If that’s not exciting enough, they’ll also embark on their own PR and marketing campaign backed by Harry Hill himself. They’ll also get the chance to schmooze with big players from The Fly – Britain’s biggest music publication – and have their video broadcast on Muzu TV – the free music video streaming site.

It’s a once in a lifetime chance to win the whole popstar package, courtesy of some of the biggest names in the music biz.