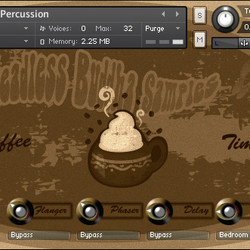 We love coffee almost as much as we love vintage gear. Once upon a time, Sanches was listening to some of his recorded ideias for a new psychedelic rock project while having a cup of coffee and started drumming almost automatically while the song kept going.

The ideia for the Coffee Time Series came from this moment. He thought:
– Hey, I have a lot of cups around the house! I could make an awesome percussion instrument with it!
So he got five of these cups in different sizes, weights, and materials and recorded a track for his new song (which still unreleased). After doing that, thought it would be useful to make a Kontakt instrument out of these five cups, and so he made it. He got his little spoon and experimented with it by hitting the cups in different positions and different areas.

The library is available to purchase for $4 USD. Until Saturday October 19th, you can get it for free when sharing on Facebook or Twitter.