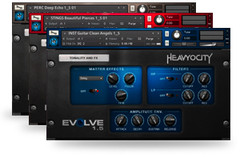 Featuring an all new interface and our signature “Trigger FX”, the Evolve 1.5 upgrade provides owners of Evolve with amazing control over the sounds. The EVOLVE 1.5 upgrade is powered by the Kontakt 4 (Kontakt 4 Player) engine.

With EVOLVE 1.5, users can create effects performances that will radically alter the original sounds. The Upgrade provides the same intuitive layout and formatting of the Evolve Instrument presets, and is easy to install. Simply drag and drop the files into the correct locations (refer to installation instructions included in download), and you are ready to go.

The EVOLVE 1.5 Upgrade is available to purhcase (for EVOLVE only, not for the Evolve Mutations Products) as a download for $29.95 USD. 50% of the purchase will be donated to Cancer research at the Memorial Sloan-Kettering Cancer Center.