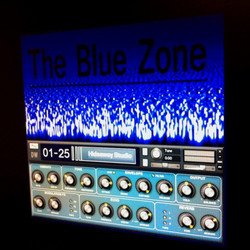 In celebration of the first year of the series a Special Edition release of the first 25 incremental releases are presented as one library along with their original audio demos. The instrument names have been prefixed to indicate their release number.

44 bonus layered multis have been included that span across the library – these have been prefixed with TBZxx and include several complex arpeggiated offerings. A “rogues gallery” of much of the equipment used to make TBZ01-25 can also be found in the documentation folder along with some production notes giving clues on what gear was used for each sound.

The Blue Zone 01-25 Special Edition is available to purchase for the introductory price of £27.50 GBP until the end of January 2014. Existing customers who have all TBZ packs can purchase a “Booster Pack” at £4.50 GBP.