Hiss and a Roar has released Chimes, a sample library featuring the sounds of various chimes. 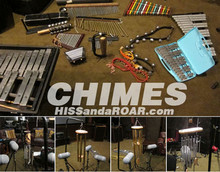 Wind chimes can be incredibly useful for colouring an ambience with subtle harmonics – I used them to great emotional effect as a nostalgic/memory device in the war film Home by Christmas. But they are also incredibly rewarding as source material for creating ambient textures and drones via processing. Bell trees and mark trees have been used over the years for many forms of ‘magical’ sounds, but their rich harmonic content does not limit their application to Disney impressions.

The Chimes library is available to purchase in two editions:

chimes, HISS and a ROAR