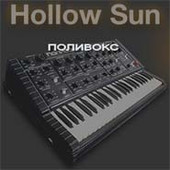 Hollow Sun has announced “A wee $1 Hogmanay giveaway”, offering its Polivoks sample library for Kontakt for just $1 through January.

It’s 1982 in the Soviet Union. Obedient comrades in the state-run factories are churning out electronic goods for the proletariat at the diktat of the communist regime. These include tape recorders, TVs and radios, etc.. The Formanta factory in Kachkanar in the Ural mountains, however, is making electronic musical instruments – organs, amplifiers, speakers, etc. – and a decision is taken there to make a synthesiser, a proper synthesiser… the kind of thing we capitalist westerners have been enjoying for the best part of 12 years or more.

So an engineer called Vladimir Kuzmin is assigned the job (with his wife) of designing such a synth. Vladimir has had some experience in this area improving the FAEMI-M, an electronic organ with basic synth facilities so it makes sense for him to lead the project.

The result is the ‘Polivoks’.