Homegrown Sounds has announced the release of Movement, a Kontakt instrument that expands on the previously released Motion vector synthesizer by adding a further 16 Motion Sequencers, taking it into new territory. 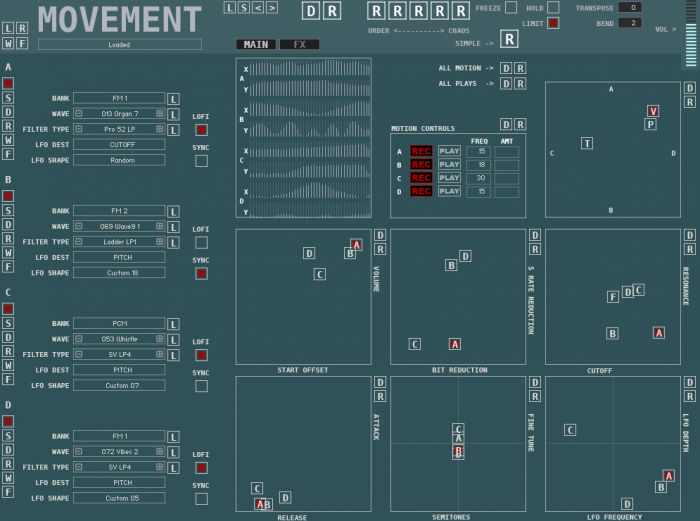 It is also capable of much simpler sounds with ease using the simple Randomizer which adds a lo t more scope for itâ€™s sonic potential. There was an attempt at simplifying the powerful yet complex interface of Motion by keeping most parameters but that could be edited using a single Panel.

There are a total of 24 Motion Sequencers which include a Vector crossfade between the 4 Synths volumes, Pan, Tune, Filter Cutoff & Resonance, Synth Volumes, Start Offset, Bit Reduction, Samplerate Reduction, LFO Frequency and LFO Amount. The XY Pads can be recorded in realtime over 128 steps and have the ability to change the Amount and Frequency of playback. As well as the ability to Record the Motion Sequencers there is also an internal database of 200 prerecorded Sequences which are used by the Randomizers.

Like most other HGS Creations, Movement makes great use of optimized Global Randomizers with a choice of complexity as well as many Local Randomizers. The FX Section includes Chorus/Flanger/Phaser, a Reverb with 50 Impulse Responses, a Stereo Delay, an EQ, a Limiter, and a Microtuner with 300 Microtonal Presets.

Movement for Kontakt 5.6 or higher is currently available for just $6.99 USD as a No Brainer Deal. The regular price is $39.99 USD.

Save 67% off Slam Pro mixing tool at Plugin Boutique