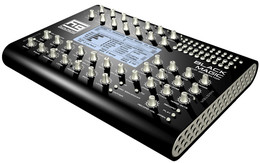 Homegrown Sounds has released a beta version of Black Magic, a unique loop workstation with the ability to generate diverse loops with a single mouse click.

Furthermore a loop can instantly be recorded out to WAV, automatically named by BPM and timestamp. The idea developed to make sample based loops an easy and fun process, as loop creation is generally a time consuming process.

Black Magic is currently available for a pre-order price of £65 GBP (you will get instant access to the current beta version). The official release will be available on 24 April, 2009 for £130 GBP.