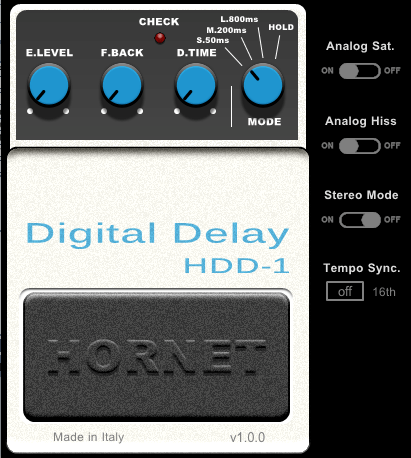 HoRNet Plugins has announced the release of HDD1, an emulation of the very first guitar pedal digital delay.

This guitar effect is born at the beginning of the 80s when digital become affordable and has some interesting usage as delay and effect unit.

The internal ADC is a 12bit one that stores the sampled data in some RAM banks, but the level, feedback and the rest of the circuit is completely analog. This kind of scheme allows for some funny low fi effect as the signal is degraded more and more each time is resampled in the feedback loop. In addition to this, the frequency response isn’t flat at all with a sharp cutoff at 7kHz and the pre-emphasis and de-emphasis filters that plays an important part in the tone of the plugin.

We also recreated the analog saturation characteristic and hiss of the original effect, as with every plug in we make hiss and saturation can be turned off separately.

The stereo mode can be used to create a fake stereo effect, this is a guitar pedal so is mono in its nature, but turning stereo mode on puts the dry signal on the left channel and the wet signal on the right. When the effect is set to the 12.5ms – 50ms the delay time is so short that it actually creates a sort of fake stereo using the Haas effect.

The “Hold” mode records the last milliseconds of sound (from 200ms to 800ms) while the effect is not turned on and repeats them when the delay is activated.

To be more helpful to DAW users we also added a ”sync to host tempo” feature that syncs the delay to the specified number of 16th.

HoRNet HDD1 for Windows and Mac (VST/AU/RTAS/AAX) is available for purchase for 9.99 EUR.