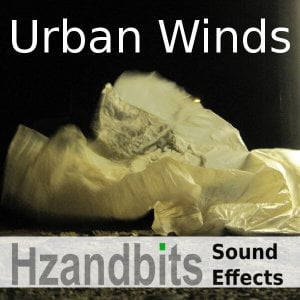 You get empty streets and construction sites, office exteriors and the port of Aarhus. You get plastic that flutters or thrashes, metal fences that clatter and vibrate, pipes and cavities resonating i the gusts. You get ambiances and specifics. I have tried to strike the balance between variety and nuance, to give you sound pros something to build a scene around. In that sense, this really is a construction kit of sorts.

You will hear very little human activity – other than distant traffic. I recorded mostly at night, and in large, undisturbed areas – and on one occasion in the aftermath of a violent storm (the kind that rips the tiles off the roofs). Had a good time standing in the relative safety of my doorway, recording stuff getting blasted down the street!

In some of the recordings, you will hear wind buffeting – more of the windscreen than the microphones – but there is some. In some cases, I opted to tame the most violent events, but others I left in. In many cases, wind noise reduction simply took away too much of the forcefulness, so I left it as is.

Some specifics appear in both mono and stereo versions, where the stereo version are X/Y derived from the M/S source files and the mono versions are simply the Mid channel. I did this, because most people seem to prefer X/Y files for post-work, rather than M/S – but a down-mix of X/Y to mono would be inferior to using the original Mid-mic signal. All sounds were captured in Aarhus, Denmark.

Urban Winds is available for purchase for $32 USD. Existing subscribers to the Hzandbits newsletter get 20% off.