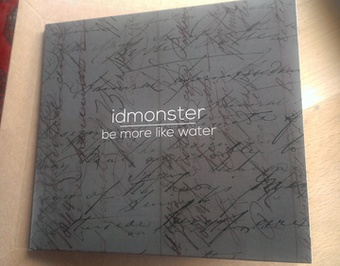 idmonster, the solo project of composer, sound designer and Butterfly Child guitarist Pendle Poucher, has announced the upcoming album Be More Like Water.

Be More Like Water is a beautiful, dark cinematic odyssey with a hint of concept album, but devoid of hippy guff. Each track is like a short film made of sound.

The album is already picking up radio play, with tracks being featured on Gideon Coe’s evening show on BBC Radio 6 and Nic Luscombe’s Late Junction on BBC Radio 3.

A very beautiful video for the track “I Was Drifting Plankton” featuring amazing microscopic plankton footage.

As an established and respected sample instrument designer Pendle also operates as www.sound-dust.co.uk creating sample libraries of obscure and slightly wonky real and imagined instruments. His clients include many established composers and musicians worldwide including Gotye, Hollywood composer Rupert Gregson Williams, Bat for Lashes, Orbital, The Chemical Brothers and David Holmes. His sounds can be heard on numerous films, TV shows and records.

To accompany the release of Be More Like Water Pendle has also made the idstrument suite a special 1GB suite of six sample instruments in Kontakt format which includes some of the significant sounds, textures and instruments from the album. It will be available as a free download to anyone who buys the CD and will hopefully inspire other musicians.

The id-strument for Native Instruments Kontakt.

The id-strument suite has recordings from old synths, broken acoustic instruments, home made contraptions and the actual ticking of economic philosopher Thomas Carlyle’s 200 year old grandfather clock (plus lots of other things too).

The album with id-strument suite sample set is available to purchase for £10 GBP. The release is set for November, 2013.