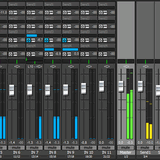 Following up our 8×2 mixer we have created a new mixer, Miksebord.
It has elleven stereo inputs one stereo master and four stereo sends.

Miksebord is available to purchase as a VST effect plug-in for Windows PC for 26 EUR / $32 USD. A demo version can be downloaded from the ifoundasound website (2 month trial).

ifoundasound has also released a new beta of LiveProfessor, the effect rack software for VST plug-ins.
Changes in LiveProfessor b1.2.3