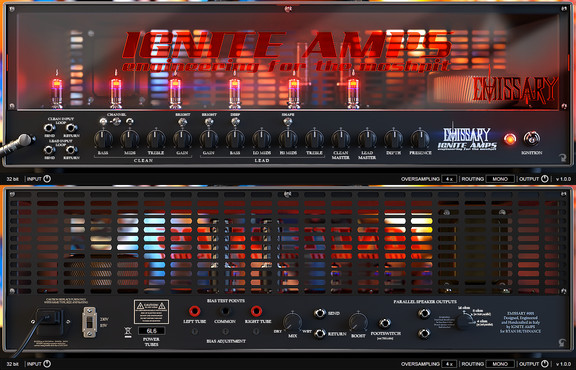 It has been developed to accurately model its real hardware counterpart, built for Ryan Huthnance (The Seer/Gaped/Chrome Bison/Emissary Studios) by Ignite Amps, in 2014.

The Emissary is a no compromise custom amp built for the kill. Featuring a very versatile clean channel that ranges from pristine cleans to slightly overdriven tones and a mean lead channel designed for serious bone-crushing distortions, it offers a very wide tonal palette for the modern metal musician.

Every single component on the signal path of the real analog circuit has been taken into account and modeled in the best possible way to match the original sound, keeping an eye on CPU performance and real-time playability at the same time.

The plug-in GUI has been 3D modeled and rendered by Voger Design, in order to resemble the real amplifier as much as possible.

The Emissary is meant to be used as a virtual guitar amplifier for live playing and jamming, tracking or mixing inside hosts capable of VST or AU Plug-Ins support.

Emissary is available as freeware. The plug-in competes in the KVR Developer Challenge 2014.