IK Multimedia has announced the addition to the AmpliTube Custom Shop of five new gear models designed and developed in close cooperation with Seymour Duncan® and Orange®. 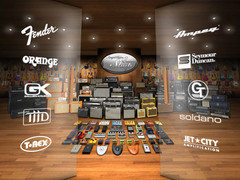 The AmpliTube Custom Shop, launched in April, has become a powerful tool for guitarists, bassists, keyboardists and producers to create their own truly custom tone from the comfort of their own studio. Now the Custom Shop has been expanded with these new gear models available today to try and buy immediately.

Two new stomp box models from Seymour Duncan are now available: the Power Grid distortion and the Shape Shifter tremolo pedal. The Power Grid has five stages and three-band active EQ which makes it one of the most versatile distortion pedals available. The Shape Shifter reproduces the hypnotic tremolo sounds characteristic of 50s tube amps with detailed “Wave” and “Shape” controls allowing you to create many different effects! These two stomp boxes mark the entry of Seymour Duncan into the AmpliTube Custom Shop, and more Seymour Duncan gear models are already in development.

Three new officially certified models of Orange gear have been added as well. The Thunderverb 200 is a powerful and flexible amp capable of all kinds of tones from vintage rock to modern blues, hard rock to metal. Nothing can match the bone crushing, bottom-end punch of this big stage tone head. The Custom Shop model brings this incredible amp within reach of all musicians and studios. Along with the Thunderverb 200, IK has also introduced two new Orange cabinets, the Tiny Terror Combo and the PPC212OB.

The new models are now available in the AmpliTube Custom Shop, priced between 5 and 20 “gear credits” each. Credits can be purchased from $1.00 / €0.75 to $0.60 / €0.45 per credit depending on Credit Pack purchased. JamPoints (IK’s reward system) can be applied (and earned) on every Gear Credit Pack purchase for a discount of up to 50% making gear prices even more affordable.