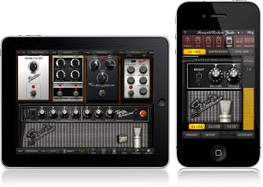 The AmpliTube Fender™ app, at its core, is all about pure Fender® tone. It was developed with careful guidance and critical tone testing from the tone gurus at Fender® to ensure the authenticity of the sound.

The AmpliTube Fender apps for iPhone and iPad costs $14.99/ €11.99 each and will soon be available on the iTunes app store. A free version will also be available and will be expandable with individual amps and effects a-la-carte through in-app purchases. The 4 –Track recorder and 8-Track recorder with master effects section on iPhone and iPad cost $9.99/ €7.99 and $14.99/ €11.99 respectively as an inapp purchase.