IK Multimedia has announced that its iRig Keys range of highly regarded mobile keyboard controllers is going universal. Both the ultra-portable iRig Keys and mobile full-size keyboard iRig Keys PRO controllers will now come with a Micro-USB to OTG cable for Android devices in addition to their Lightning and USB cables. 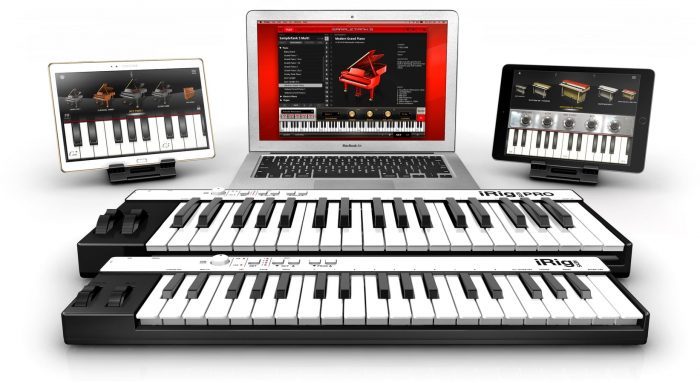 Now, for the exact same affordable price, players can plug in and jam out on a compact and fully functional keyboard with an even wider array of their favorite mobile devices than ever before – iRig Keys and iRig Keys PRO are now ready to go with Lightning-compatible iOS devices and Android devices as well as Mac/PC right out of the box.

Portable performance
The iRig Keys line has established itself as a firm favorite of keyboard players across the world. iRig Keys (previously named iRig Keys with Lightning) is an ultra-slim and extremely portable MIDI keyboard controller with 37 mini-keys. iRig Keys PRO is a similarly slim keyboard that gives players the luxury of 37 full-sized keys in a controller that can be easily carried in a gig bag or backpack. Both deliver a full 3 octave range (plus one note) and come equipped with all the extras that keyboard players love: mod and pitch bend wheels, a Volume/Data knob, a SET button for storage and recall of up to 4 different custom setups, input for a sustain or expression pedal and more. With compact size and advanced features, the iRig Keys line offers keyboard players a portable playing experience like no other.

Complete compatibility
With the arrival of this announcement, both iRig Keys and iRig Keys PRO are compatible with more devices than ever before. Each now comes boxed with Lightning, Micro-USB to OTG and USB cables. This means that they can be immediately used with Lightning-compatible iOS devices, Android devices and Mac/PC right out of the box. In addition, an optional 30-pin cable can also be purchased for use with 30-pin iOS devices. And no matter what device is used, both iRig Keys and iRig Keys PRO deliver a seamless plug-and-play experience thanks to built-in Core MIDI compatibility for iOS and USB class compliance.

iPhone, iPad and iPod touch users will receive: a complimentary version of iGrand Piano for iPhone and iPad, a concert-quality multi-velocity piano app that comes with 2 world-class piano sound to start plus 1 extra piano upon registration. 15 additional studio-grade instruments can be purchased from within the app. iOS users will also get the complimentary version of SampleTank for iPhone and iPad, a complete mobile sound and groove workstation with 23 included sounds that cover acoustic, electric, electronic and beyond. Registration unlocks 48 additional high-quality sounds.

Android users will receive: iGrand Piano, a complimentary Android version of the aforementioned piano app that includes the same world-class sounds as its iOS counterpart. And like that app, it comes with 2 stock pianos and includes 1 extra upon registration. And, Android users will also receive a complimentary version of iLectric Piano, a studio-quality electric piano app with a library of multi-velocity stereo instruments sampled from some of the most iconic electric pianos ever made. Users get 2 pianos to start plus 1 additional upon registration. 15 additional studio-grade instruments are available via in-app purchase.

And, finally, computer users will receive SampleTank 3 SE, a special edition of the ultimate sound and groove workstation for Mac & PC with a 6.5 GB library of sounds that cover every instrument category from acoustic to ethnic, electronic to orchestral and beyond. Registration of iRig Keys or iRig Keys PRO adds to this base library with a huge bundle of extra sounds in the form of The Grid add-on collection. Plus, users can choose 5 additional FREE SampleTank instrument collections from its electronic-focused Elektronika and Beats series, and they receive 25 Custom Shop gear credits that can be used toward the purchase of additional SampleTank Instrument Collections.

iRig Keys and iRig Keys PRO are available for 129.99 USD/EUR and 149.99 USD/EUR respectively (excluding taxes). Users who purchase an iRig Keys with Lightning or iRig Keys PRO starting October 1, 2015 are eligible to receive Micro-USB to OTG cable at no cost, if one is not included. Contact IK Support to request the cable. Eligible users must register the product and provide proof of purchase.