IK Multimedia has announced version 4.6 of T-RackS CS (Custom Shop), featuring the EQ 73 and the EQ 81, two new must-have British EQ models that provide the warmth and tone heard on countless recordings around the globe. 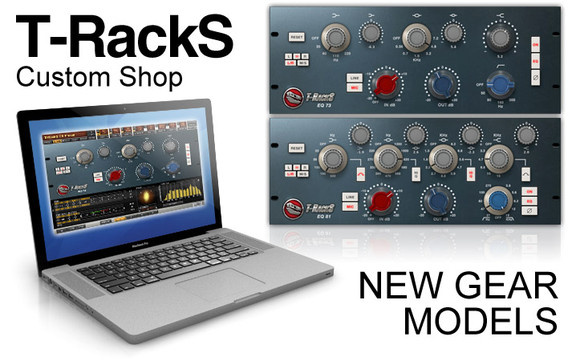 The new T-RackS EQ 73 model is based upon a classic British hardware unit that is universally acknowledged as the most used preamp in music recording history. The original “class A” device has a sonic signature almost instantly recognizable to engineers and recording enthusiasts the world over. Thanks to its unique and innovative circuitry the signal passing through it becomes thick and bold making every instrument stand out with audible fullness. The T-Racks EQ 73 model captures this nuance so that even in the DAW environment the tone stays intact.

The EQ 73 is an extraordinary EQ, and our engineers went the extra mile to make sure the part of the preamp circuitry functionality was captured as well — a feature no other emulation on the market has included. The interaction between the preamp and the EQ section is what makes this legendary EQ so desirable. The gain range is so wide that many color shades can be found. At lower settings it adds some harmonic coloration that will make kicks or snare fatter and punchier. Going up the gain hill moves it into downright distortion with an analog saturation rarely found in DAW plug ins. This is a killer function that adds that elusive “analog” character to a sterile sounding track, or provides a new creative effect.

Following in the footsteps of its older sibling, the EQ 81 takes the word versatility even further; the EQ section is composed of 4 independent frequency bands, rounded out by high and low pass filters to eliminate unwanted frequencies from the signal. This EQ powerhouse is at home in practically any mixing work where there is the need to sculpt the tone of a track with precision and musicality. Plus, adding to the versatility is the ability of the high and low shelving bands to become peaking type if needed.

As with the EQ 73 model, IK Engineers made sure the preamp circuitry modeling was ultra-accurate and usable. It’s class A/B circuit design delivers another range of tonal coloration, and while the EQ section is so accurately modeled in the EQ 81, its interaction with the preamp stage is what really sets the module apart providing identical sonic hardware performance not found in other digital models. Countless hours were spent not only in making sure the EQ curves are dead-on accurate, but that the preamp response and overall module interaction was faithful to the original hardware unit.

Both the EQ 73 and the EQ 81 models have the dual concentric knobs found on the original units “separated” for easier and faster shaping, and the unit offers improved readability of the knob positions for quick adjustment.