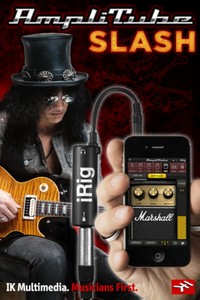 IK Multimedia is offering 40% off AmpliTube Slash for iPhone/iPod touch and iPad and In-App purchases in a limited time sale.

Now you can play through a rock icon’s pedals and amplifiers, all from the convenience of your iPhone or iPad. AmpliTube Slash features models of all the legendary signature gear used by Slash in the studio and in his live performances. You can rock models of the legendary Marshall® JCM Slash Edition Silver Jubilee, the Marshall® AFD100, 6 Slash’s signature guitar pedals, and play along with Slash’s extensive discography or any music from your music library.

Use IK’s AmpliTube iRig or iRig STOMP mobile interfaces to connect your guitar, bass or keyboard to your mobile device and you are ready to rock! You can also use the iRig Mic to process and record vocals and acoustic instruments with this powerful mobile suite.