IK Multimedia has announced the release of AmpliTube Studio, adding timeline audio editing to the mobile guitar studio AmpliTube in a version 3.0 update. 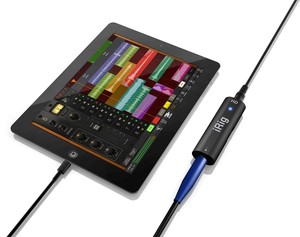 IK is proud to announce the new version of the highly acclaimed AmpliTube® App, which now adds a complete multi-track Studio with timeline audio editing and new gear models, making it the most comprehensive guitar and audio production app available. Now you can play, practice, compose and record complete songs from start to finish, anywhere inspiration strikes, on their iPhone, iPad and iPod touch.

The new release of AmpliTube completely changes the game for mobile music production and offers everything musicians need to quickly and easily record complete songs: a full guitar/bass rig; a multi-track recorder with effects; a new timeline audio editing suite for arranging, editing, mixing and mastering; a built-in programmable drummer; professional export features for sharing creations with the world; and the possibility to work simultaneously with other audio apps.

Plus new features are continuously being added, including AutoFreeze, which allows for separate effects rigs on each recorder track. The new AutoFreeze feature allows you to “freeze” the effects on a track (in other words, write them to the track), freeing up AmpliTube’s effects engine to use on another track, which can then be frozen and so forth. As a result, you can have full effects on every track. And if you want to go back and tweak an effects setting, no problem, you can “un-freeze” the effects on a track to make your adjustments.

When used with the IK Multimedia iRig® line of guitar interfaces (like the new high-quality iRig HD, iRig STOMP or the iRig adapter), microphone products (like iRig Mic or iRig PRE) AmpliTube 3.0 provides an all-in-one solution with unmatched sound quality, guitar tone, recording flexibility and ease of use for the professional mobile musician.