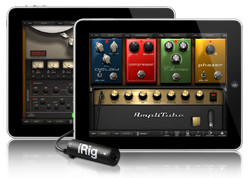 IK Multimedia has announced the release of AmpliTube 2 for iPad, a complete guitar multi-effects processor, recording and production studio for your iPad.

After its initial release 5 months ago, IK proudly brings to you a new version of AmpliTube for iPad with features designed to streamline and enhance the mobile guitar and bass playing experience: from the creation and naming of guitar signal chain tone presets to importing, recording and exporting audio. Players will hear the difference in the sounds from the gear models, and more importantly, record their performances quickly and easily with the new built-in recorder.

AmpliTube 2 for iPad gives you the same incredible ultra-realistic sound and modeling accuracy of its Mac/PC applications in a convenient mobile platform app. Combine this powerful app with iRig, an easy-to-use instrument interface adapter, and you’ll be able to plug your guitar into your iPhone/iPod touch/iPad and jam anywhere with world class guitar and bass tone.

Changes in AmpliTube 2 for iPad