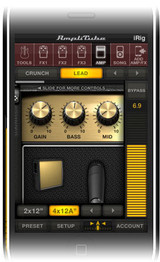 IK Multimedia has announced the release of AmpliTube for iPhone, the ultimate mobile guitar amp and effects system for iPhone/iPod Touch/iPad.

Together with the iRig interface adapter this represents the first complete solution for guitar and bass players to play, practice, and have fun anytime and everywhere rocking through their iPhone. The combination of AmpliTube mobile app and iRig accessory adapter is called AmpliTube® iRig™, the cutting edge system for the portable guitar and bass multi-effects of the future.

At the core of the AmpliTube iRig is AmpliTube for iPhone, developed by IK Multimedia, the leader in gear modeling for professional studios, to get the most accurate tone from your iPhone. AmpliTube for iPhone gives you incredible, ultra-realistic sound and functionality in a convenient mobile app with 3 simultaneous stompbox effects, an amp-head plus cabinet and a microphone, offering more power than traditional pocket-size guitar effect processors!

AmpliTube for iPhone is now available from the iTunes App store in 3 versions:

More gear can be added to FREE and LE versions through in-app purchase of a-la-carte models with stompboxes costing $2.99/€2.39 each and amplifiers + cabinets for $4.99/€3.99 each.

Pre-orders for the iRig interface adapter are already available through IK Selected Dealers and from the IK online Store for $39.99/€29.99 MSRP (excluding taxes). iRig will start shipping worldwide the first week of July, 2010.