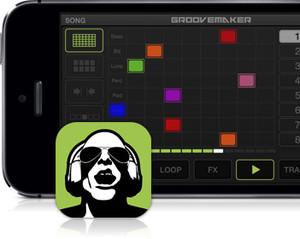 IK Multimedia has released GrooveMaker 2 for iPhone and iPod touch, the most powerful mobile loop based music making app with a patented “groove generator” engine that lets anyone create professional quality non-stop grooves, beats and songs in real time on the go.

GrooveMaker 2 has been completely redesigned with a slew of powerful new features, giving users total control over their creations while functioning as a live performance powerhouse app.

There are literally millions of groove possibilities that can be constructed and deconstructed with GrooveMaker 2. Over 3,600 available loops from a continually expanding library of over 60 collections for virtually every style of groove music including House, DubStep, Hip-Hop, Techno, Electro, D’n’B, Trance, Reggae, Reggaeton, Rock, and artist’s packs from Ace of Skunk Anansie, Chris Domingo and Cool & Dre and more.

There are tons of new and powerful performance features in GrooveMaker 2. The new Grid Interface allows users to literally “draw” new grooves by dragging their finger across the screen, as well as being able to change the length of individual loops and grooves down to 1/4 of a bar. Additionally, GrooveMaker 2’s time-stretch engine allows complete tempo changes (up to 200% and down to 50%) without affecting the pitch of the loops.

GrooveMaker 2 also features a suite of up to 16 creative effects users can apply “on the fly” to mixes
and grooves, including staple effects like delay, reverb, filter, flange and wah, but also specialized effects designed forlive DJ performance like stutter, noise, twist, tail, brake and spin. Furthermore, one of the most requested features is now fully implemented in GrooveMaker 2: audio recording and audio import (E-mail, FTP, SoundCloud, and more).

GrooveMaker 2 is available to purchase for 8.99 EUR. A free version can be downloaded on the App Store.