IK Multimedia has announced the release of the iRing motion-tracking controller for iDevices. 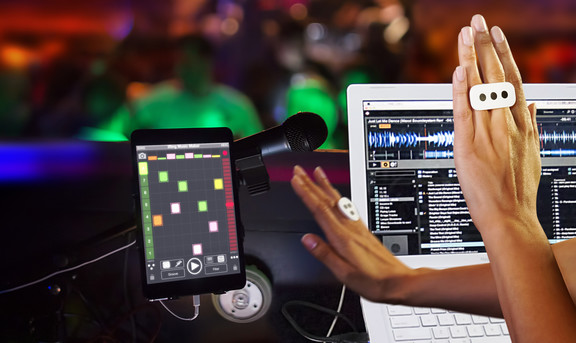 Originally presented at CES 2014, iRing is a wearable and affordable controller for iOS music apps and more. It allows touch-less parameter control via state-of-the-art motion-tracking technology.

iRing utilizes a wearable ring with identifiable markers, the mobile device’s front-facing camera, and advanced computer vision with highly-optimized recognition algorithms to determine the precise positioning of the ring markers. The device camera picks up the positioning of the ring patterns and the apps convert that information into music commands for dedicated app or MIDI information, which any compatible music app can read. This means that a user can operate up to six controllable music parameters in their preferred music apps with one or two hands gestures.

Also included are two free apps for music applications, which are intended for everyone from music lovers to DJs to seasoned musicians: iRing Music Maker and iRing FX/Controller.

iRing Music Maker is a free app designed to give music lovers and DJs a fun new way to create  music and grooves using hand gestures, no matter what their skill level. iRing Music Maker  utilizes music “loops” that always sound good together and can be remixed in virtually limitless  combinations by simply waving the hands with the iRing controllers in front of the device’s  camera. To learn more about iRing Music Maker, watch this video playlist.

iRing FX/Controller is the app for musicians and DJs that is both a real-time audio  effects processor and a MIDI controller with fully assignable parameters. It can be used as a  touch-less outboard audio effects processor, or can be fully configured to send multiple  simultaneous MIDI parameters such as control changes, notes, or any other MIDI messages.   To learn more about iRing Music Maker, watch this video playlist.

There is an SDK and a free licensing program available upon request for developers who want to integrate motion control into their apps.

The iRing is available for purchase in three colors (white, green and grey) for $24.99 USD / 19.99 EUR (ex. taxes). iRing FX/Controller and iRing Music Maker apps will be available as free downloads from the App Store.