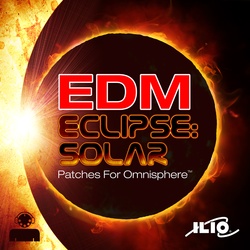 ILIO has announced the release of EDM Eclipse: Solar, a collection of 130 new patches for Spectrasonics Omnisphere from EDM producer/sound designer MIDIhead.

While EDM Eclipse: Solar focuses primarily on EDM styles, it also works well for pop, hip-hop, trap, and even film and television music creations. Each sound has been crafted from Omnisphere’s synthesis engine and its core library of included sound sources.

EDM Eclipse: Solar focuses on the use of the modulation wheel for maximum sound-altering control. Many patches are also optimized for use with The Orb, giving you even more real-time control on-stage and in the studio.

The sound library is available for purchase for $19.99 USD.