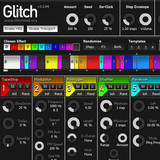 Illformed has released version 1.3.05 of Glitch, a free multi-fx plug-in effect for Windows.

Glitch chops up your audio in real-time and applies a variety of effects which can either be chosen at random, manually sequenced, or a mixture of both. The sounds it generates range from quite subtle to extremely bizarre, depending on how much you tweak the controls.

Glitch is available to download as a freeware VST effect plug-in for Windows PC.