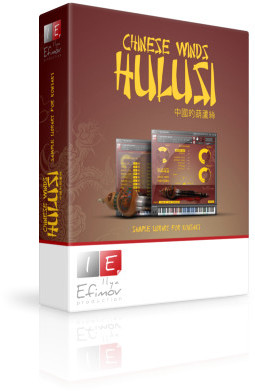 The hulusi or cucurbit flute is a free-reed wind instrument from China. It is held vertically and has three bamboo pipes which pass through a gourd wind chest; the center pipe has finger holes and the outer two are typically drone pipes. It is not uncommon for a hulusi to have only one drone pipe while the second outer pipe is merely ornamental. The drone pipe has a finger hole, which allows it to be stopped.

The Hulusi library can allow a user to imitate virtually anything that a real hulusi could play. Ii8intervals were recorded for up and down legato articulations in two variants: normal legato and glissando. We have provided the ability to vary the dynamics of the instrument to convey a wide, detailed range of expression from pp to ff. Natural vibrato may be added to the sound at any time. Staccato articulations provide added realism by means of a round-robin algorythm.

The library is available for 39 EUR. Requires full retail version of Kontakt 5.3+.