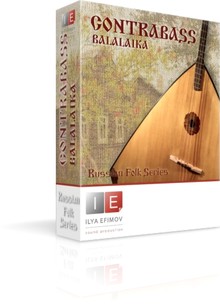 This instrument has a special place in the balalaika family. The largest in size, Contrabass produces the lowest, most powerful dynamics and sound – equivalent to an upright bass. As with all balalaikas, It has three strings, tuned E-A-D. Main Range: E (bass-octave)-A (treble octave). The notation in the bass clef is written an octave higher than its actual sound.

The library is available to purchase for 29 EUR.