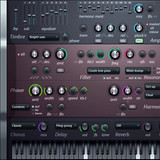 Image-Line has released Harmless, a virtual synthesizer instrument for Windows.

You may ask: why?

For several reasons. To begin with, there are too many subtractive synthesizers already, often bragging about being virtual analog. This one is digital, and proud to be. Everything is fake, the tone generator, the filter & its resonance, the phaser, all performed on the harmonics, before partials are computed.

Now, how it’s synthesized shouldn’t matter after all, if the result sounds subtractive. But Harmless is more than a proof of concept, it allows fine control that wouldn’t be possible through classic subtractive synthesis. Filtering and phasing can be assigned unusual shapes & slopes, something normally only possible through offline digital filters. Filter slopes can even be defined in Hz instead of octaves. Finally, you get control on each partial’s frequency, creating timbres definitely impossible using common synthesis methods.

Harmless is available to purchase as a VST instrument for Windows PC for whatever price you like until December 31, 2009 (minimum of $9 USD to cover the transaction fees and handling).